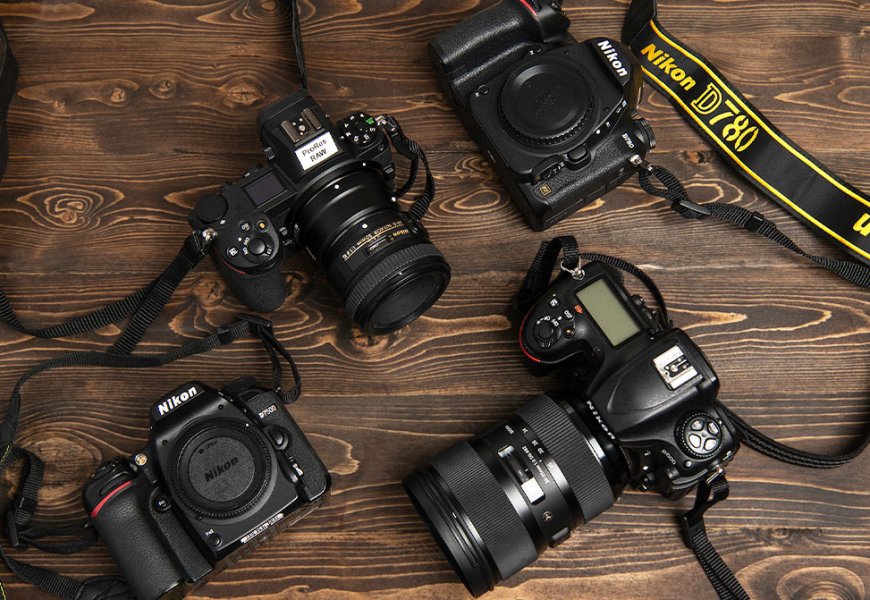 This article is a continuation of the topic of choosing a DSLR Nikon camera for amateur photography. The previous article was about Canon EOS SLR cameras, now it’s time to consider another equally worthy manufacturer – Nikon. When it comes to choosing an amateur DSLR, the price range is likely to range from 25 to 50 thousand rubles. In this price range, you can find no less than 7 models of Nikon SLR cameras of classes from the initial amateur to semi-professional, and the differences between the characteristics of the “neighboring” models in the lineup can be negligible, and the price difference is quite noticeable. To understand all this diversity, you need to shovel a lot of sites with reviews or comparisons. To save you time, I have done all this work and am sharing the results in this article. I did not set myself the goal of comparing absolutely all the characteristics of cameras and, moreover, to hang some labels like ” model B, since it has 15% more focusing sensors. “I once met similar things on one site, which automatically evaluated one model in comparison with another (I do not remember the address), stupidly comparing the numerical characteristics. with Nikon DSLR classes:

In this article, we will focus on models with a 4-digit index, since they are the most massive and popular in view of their good characteristics for their class and relative affordability. First of all, let’s pay attention to the 3000th family

The 3000th Nikon family represents the simplest DSLRs, which are primarily aimed at novice amateur photographers, and simply at those who buy a camera “for home, for family.” Now on sale there are mainly models D3200, D3300, a little less often the outdated D3100. The very first device in the D3000 family has not been sold in stores for a long time, but it can be found in huge quantities at flea markets.

The differences between the “neighbors” in the 3000th family are not very large and at first glance are not even noticeable, but if you compare the “extreme” ones, there are still differences. A short list of the main differences is shown in the table:

As for the resolution of the matrix, 10 megapixels are more than enough for amateur shooting. A further increase in megapixels does not bring a noticeable improvement in the quality of photos when viewed on a monitor and printed in a small format.

The D3300 has no low-pass filter on the matrix. What does it do? The low-pass filter is a “glass” that covers the matrix and the purpose of this “glass” is to smooth. The picture in order to exclude the formation of pixel “steps”. On oblique lines, as well as to remove moiré from photographs.

Modern models of cameras often do not have a low-pass filter. these problems can be corrected by software “on the fly”, fortunately, the increased processor power allows you to do this without a visible decrease in operating speed. The absence of a low-pass filter is theoretically capable of making photographs sharper, but this advantage is fully manifested only when using good expensive optics.

High-speed burst shooting is important for the most part in reporting, but it can be useful for amateur shooting as well. For example, someone jumps from a tower into the water. If you shoot this in burst mode. You can clearly trace all the phases of the jump – from the moment of separation from the tower to entering the water. At the same time, it is interesting to observe the change in facial expression and posture of a person 🙂 The higher the burst shooting speed, the more detailed the picture of the event we will get and the more chances to choose the “best” photos.

The screen resolution is in demand mainly when focusing manually in LiveView – when shooting video and when taking photos with manual focus. The screen resolution has nothing to do with the technical quality of photos, but it is easier and more pleasant to work with a high-resolution screen. Nikon DSLR have become capable of filming starting with the D3100, the D3200 is a transitional version, on which everything was “perfected and perfected”, but video camera for youtube, Instagram, and other social network is implemented in the best way in the D3300 (of those listed). It allows you to shoot at a frame rate of 60 fps in FullHD resolution, then to make a smooth slow-motion video out of it.

Also, the D3300 model has the ability to connect an external microphone. However, the devices of the 3000th family do not have “hybrid” focusing, which will allow to automatically keep focus on the subject when shooting video – this is a serious disadvantage that makes it impossible to fully recommend Nikon D3 *** DSLRs for those who like to shoot video. Despite the characteristics “on paper” as in professional filmmaking cameras of 5 years ago, Nikon 3000 cameras are primarily designed for ordinary amateurs who take the lion’s share of shots in auto mode and subject programs.

Naturally, the Nikon D3000-3300 has manual mode and RAW, which theoretically allow you to achieve professional-quality photos, but when shooting we face a number of limitations.

If you dig around, there are probably some other restrictions, but this will already be nit-picking. The disadvantages listed above make it clear that the Nikon D3000-3300 is not worth buying for professional photography. This is a purely amateur camera. Compared to Canon, the 3000 family falls somewhere between the four-digit and three-digit series. Roughly speaking, the Nikon D3300 is better than the Canon EOS 1200D but is inferior in some features to the Canon EOS 700D.

The 5000th family is not much different in its basic characteristics from the Nikon cameras of the 3000th family comparable in a generation, but they are positioned a class higher. The main consumers. Are amateurs who already have some experience and the requirements for the functionality of. The device are higher than those of ordinary amateurs.

As you can see, the list of differences is quite significant. This makes the Nikon 5000 family the perfect choice (from Nikon) when you need a versatile camera for all occasions. Of course, it will take some time to learn all the possibilities and features of the camera. It will take more time and effort than mastering the D3000 family camera. Inside the class, cameras do not differ as dramatically as compared to the 3000th family. New models have a sensor of higher resolution (24 megapixels), they have new opportunities in terms of video shooting. Almost all innovations look like “polishing” of an already quite perfect camera.

In terms of photography, there is no fundamental difference between the last three models. Especially if the optics park is limited to budget lens models. Based on this, it is worth making a decision – is it worth overpaying 10-15 thousand rubles for the “novelty” of the carcass or spending them, say, on a high-aperture fix or an external flash? I would choose the latter …

Nikon 7000 series cameras are positioned as semi-professional. Their functionality includes everything that is in the 5000th series. But at the same time there are functions and capabilities that are not in the lower grades. The 7000th family is a serious camera that can do a lot. Another thing is that this “much” is practically not in demand in the amateur niche.

Nikon D7200 is currently the flagship of the 7000 families. The main advantage regarding the quality of photos is that the cameras of the D7000 + family have about 1.5 more working ISO range compared to the models of the 5000 family. It seems strange – the matrices are the same, the processors are the same. However, nobody has canceled the capabilities of the built-in software that is used for signal processing. Apparently, in the 3000 and 5000 families, processing is carried out according to a more “cut” program.

The relatively low noise level is not the only advantage of the devices of the 7000th family. Below I will simply list the main things that are in the 7000th series and not in the younger ones. I will explain why this is needed.

There are other differences in terms of support for GPS. Wi-Fi, microphone input, recording sound comments for photos, and other secondary functions that few use.

Summing up, I can only say one thing – Nikon D7100, D7200. D7500 cameras for amateur use are not worth buying (at least I would not). Not because they are “bad” – by no means! It’s just that those advantages that cause a rise in price by at least 50% in comparison with. The 5000th series in everyday life will be used at best by 1%. Arithmetic is clearly not in favor of a simple amateur photographer.

If the camera is purchased as a means of production and the photographer knows exactly.

what he needs is a shutter speed of 1/8000. With an X-sync time of 1/320 second, etc. (see above), the 7000-series camera looks like a very smart solution. In terms of picture quality. These devices are comparable to full-frame ones for the same price, and in some parameters they surpass them.