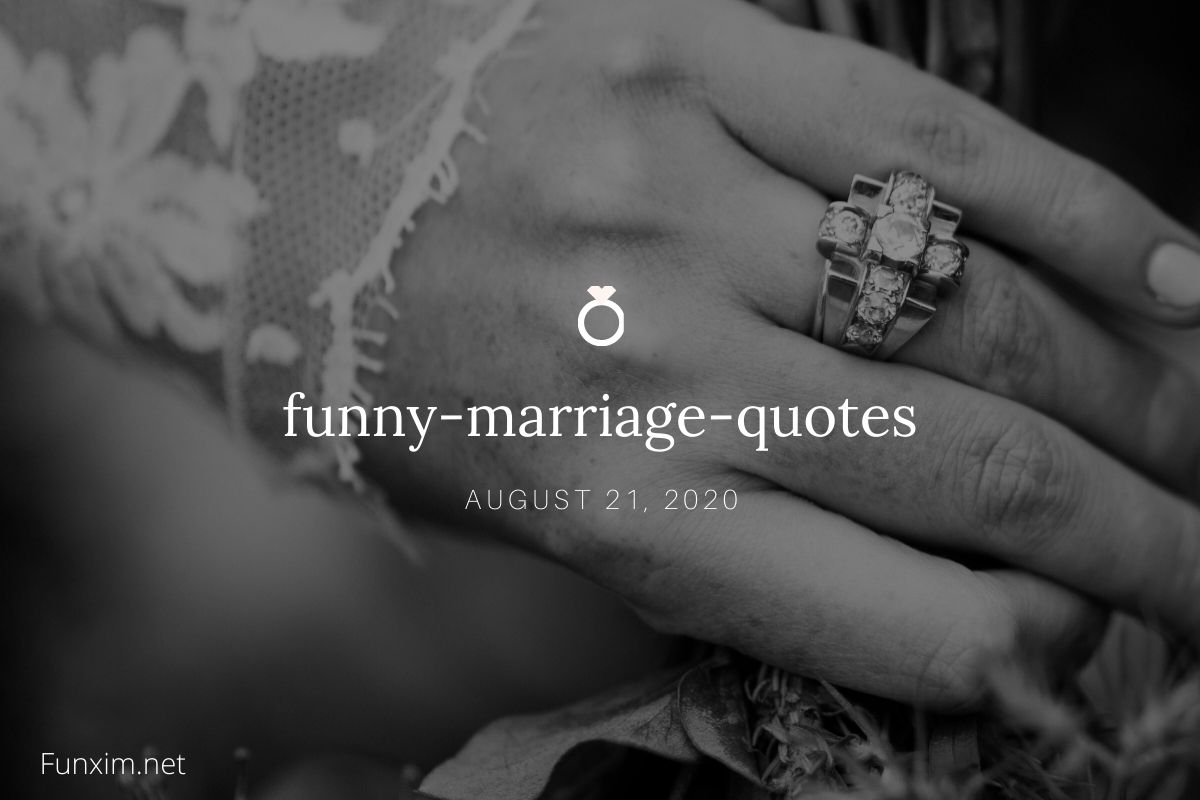 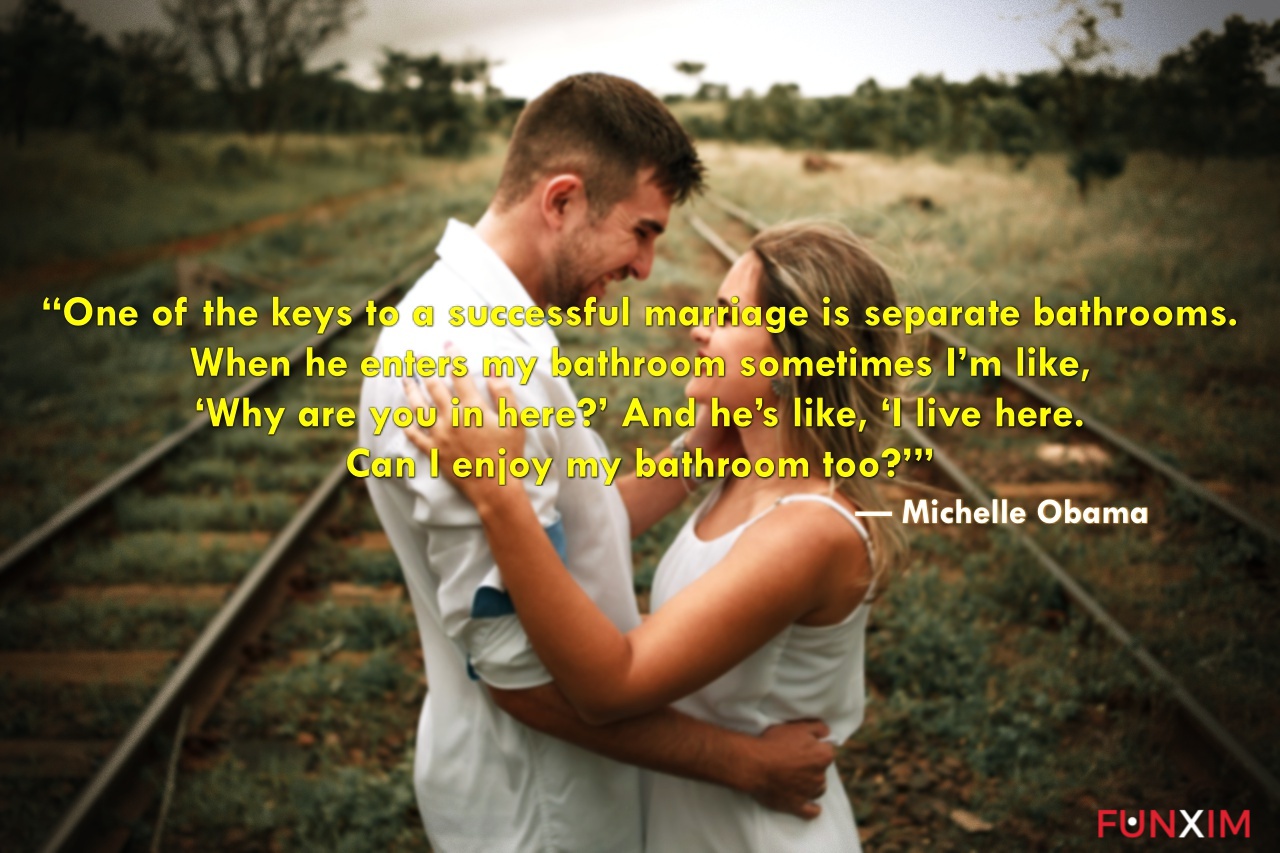 “One of the keys to a successful marriage is separate bathrooms. When he enters my bathroom sometimes I’m like, ‘Why are you in here?’ And he’s like, ‘I live here. Can I enjoy my bathroom too?’” — Michelle Obama 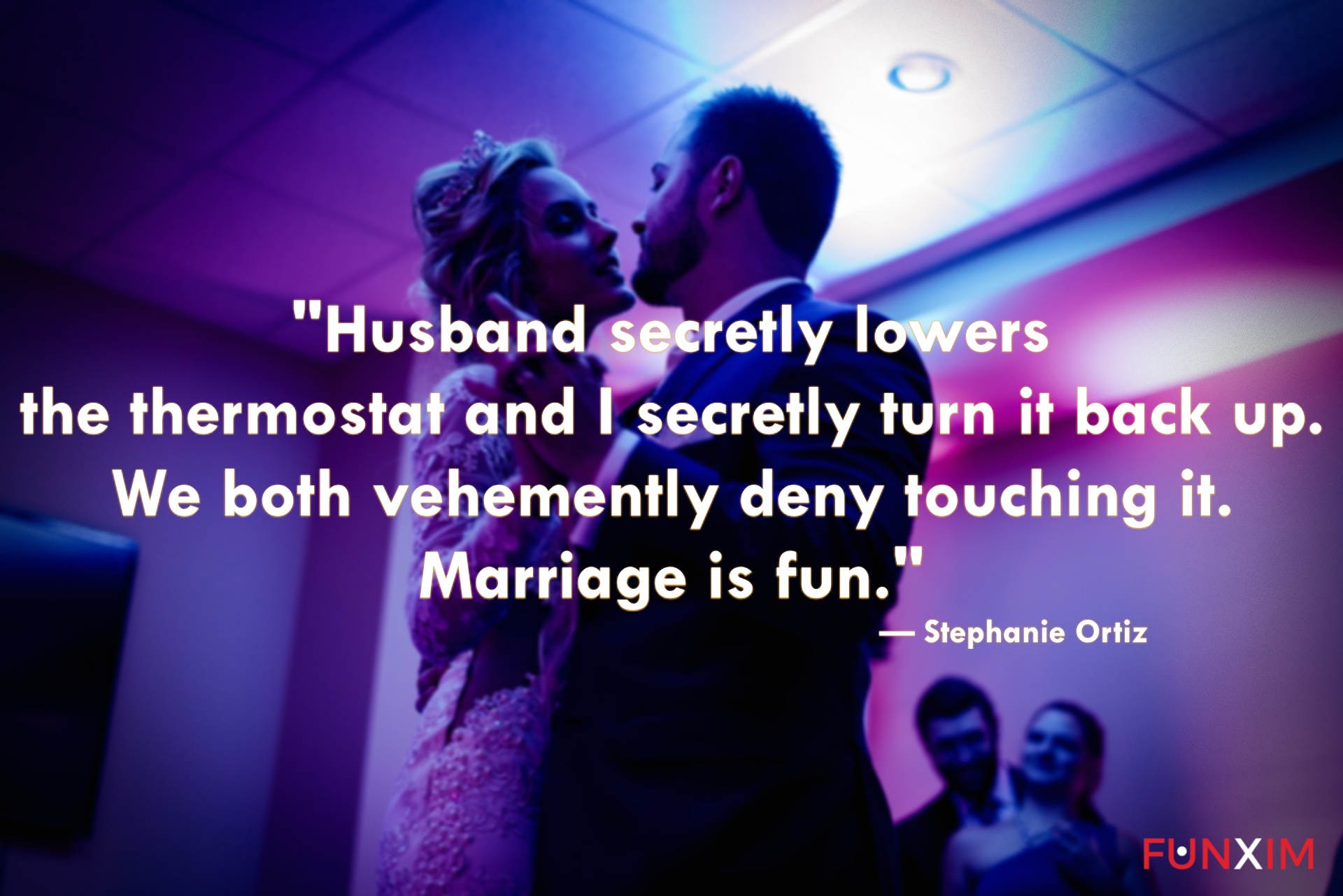 “Husband secretly lowers the thermostat and I secretly turn it back up. We both vehemently deny touching it. Marriage is fun.” — Stephanie Ortiz 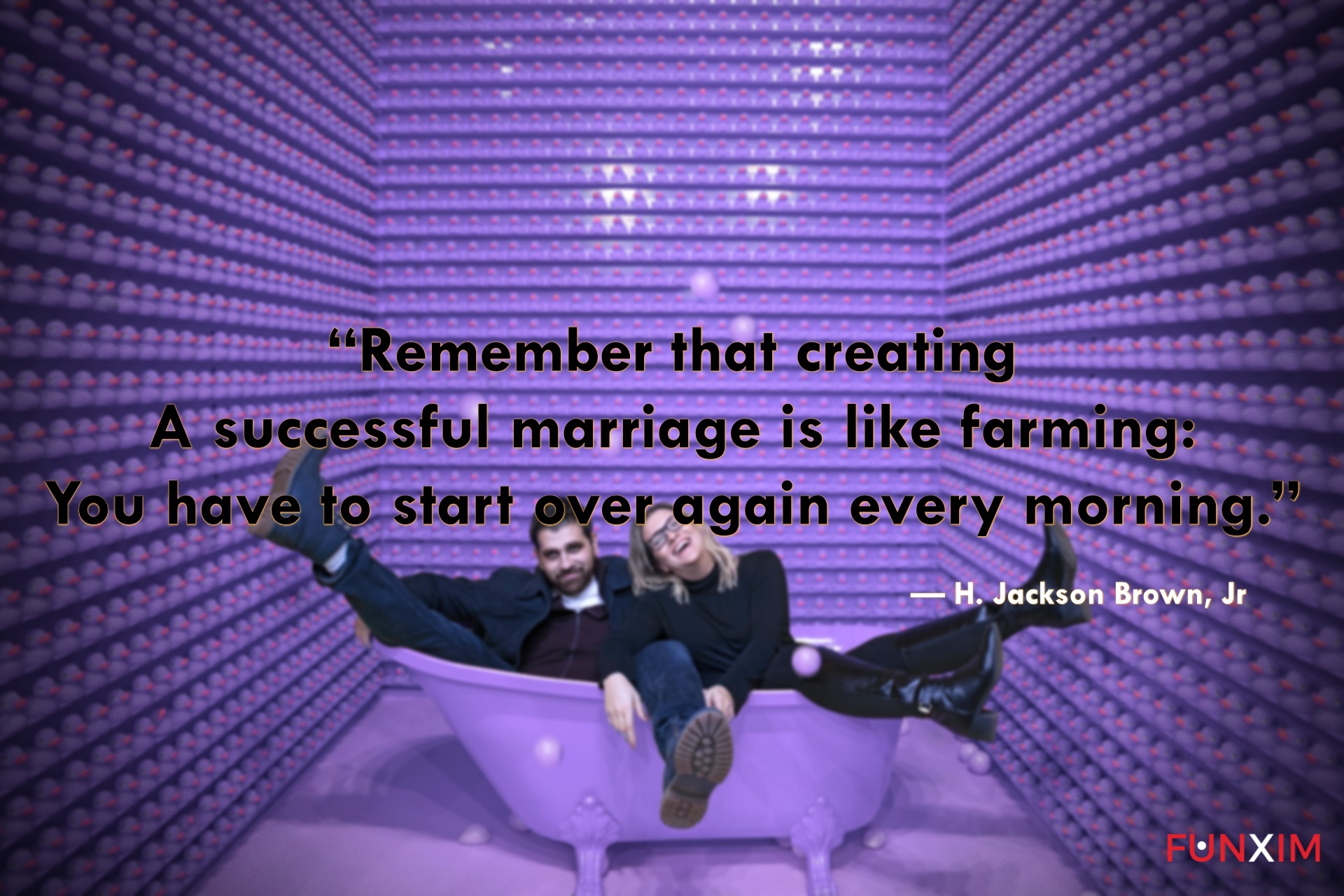 “Remember that creating a successful marriage is like farming: you have to start over again every morning.” — H. Jackson Brown, Jr 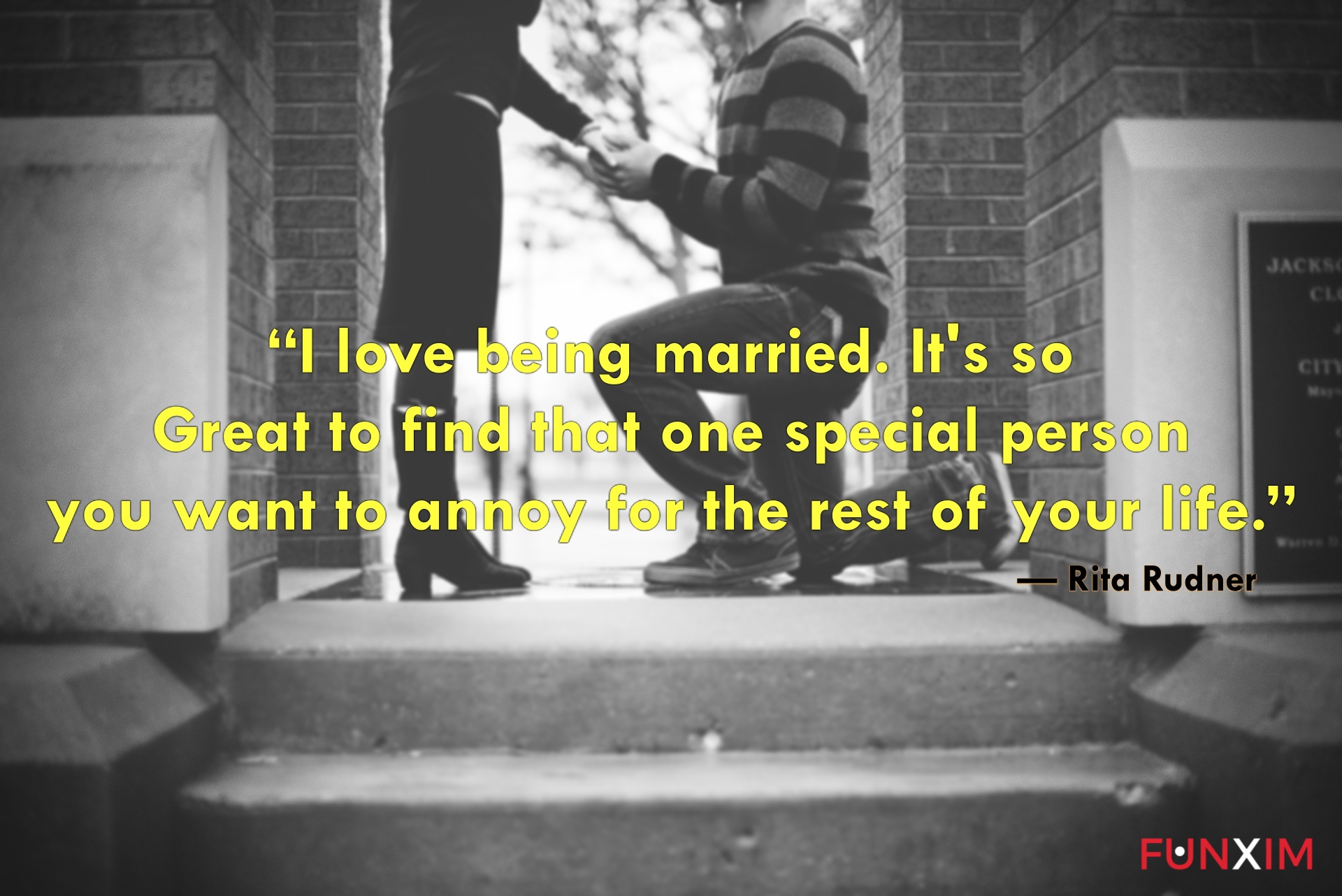 “I love being married. It’s so great to find that one special person you want to annoy for the rest of your life.” — Rita Rudner 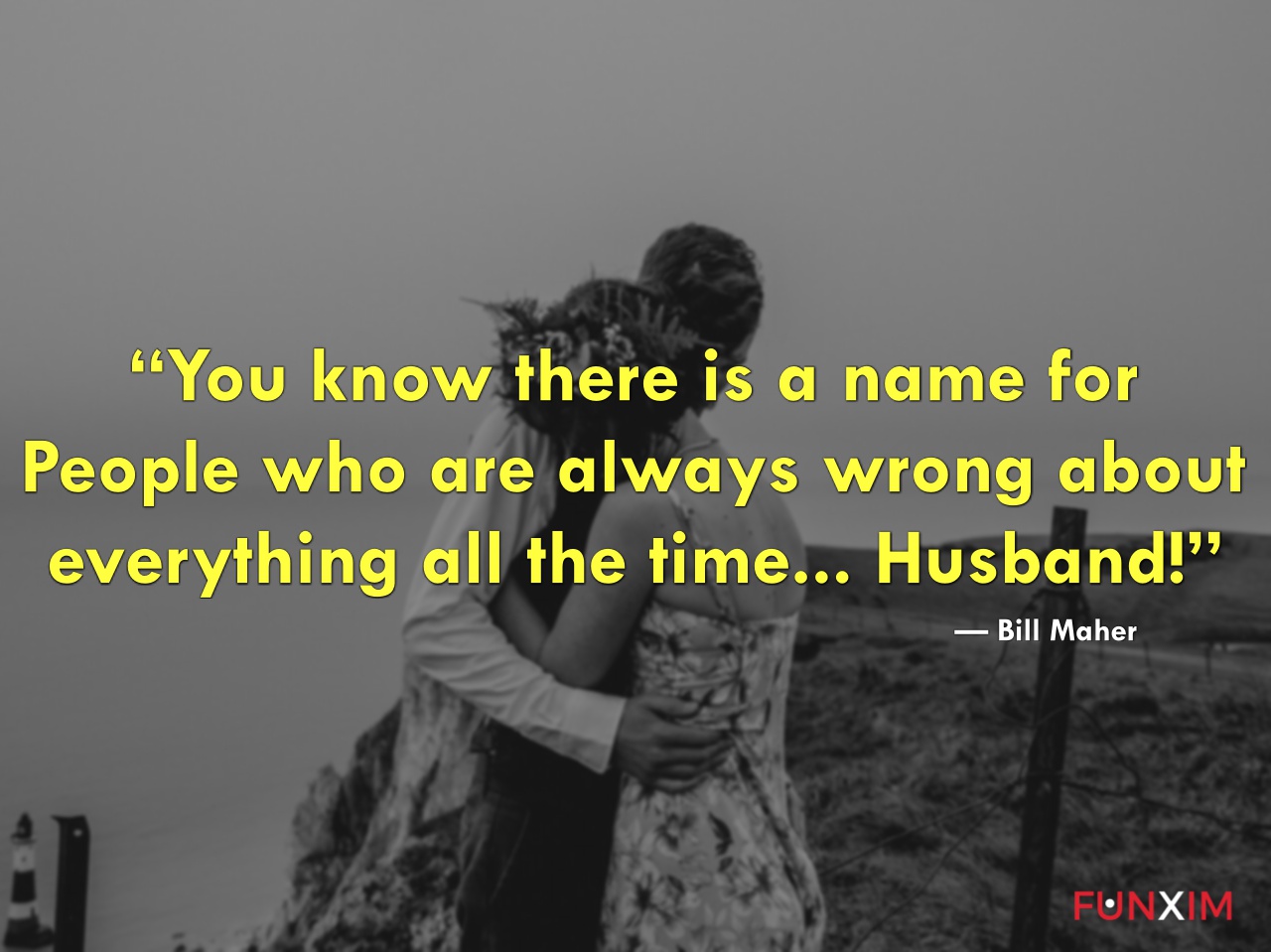 “You know there is a name for people who are always wrong about everything all the time… Husband!” — Bill Maher 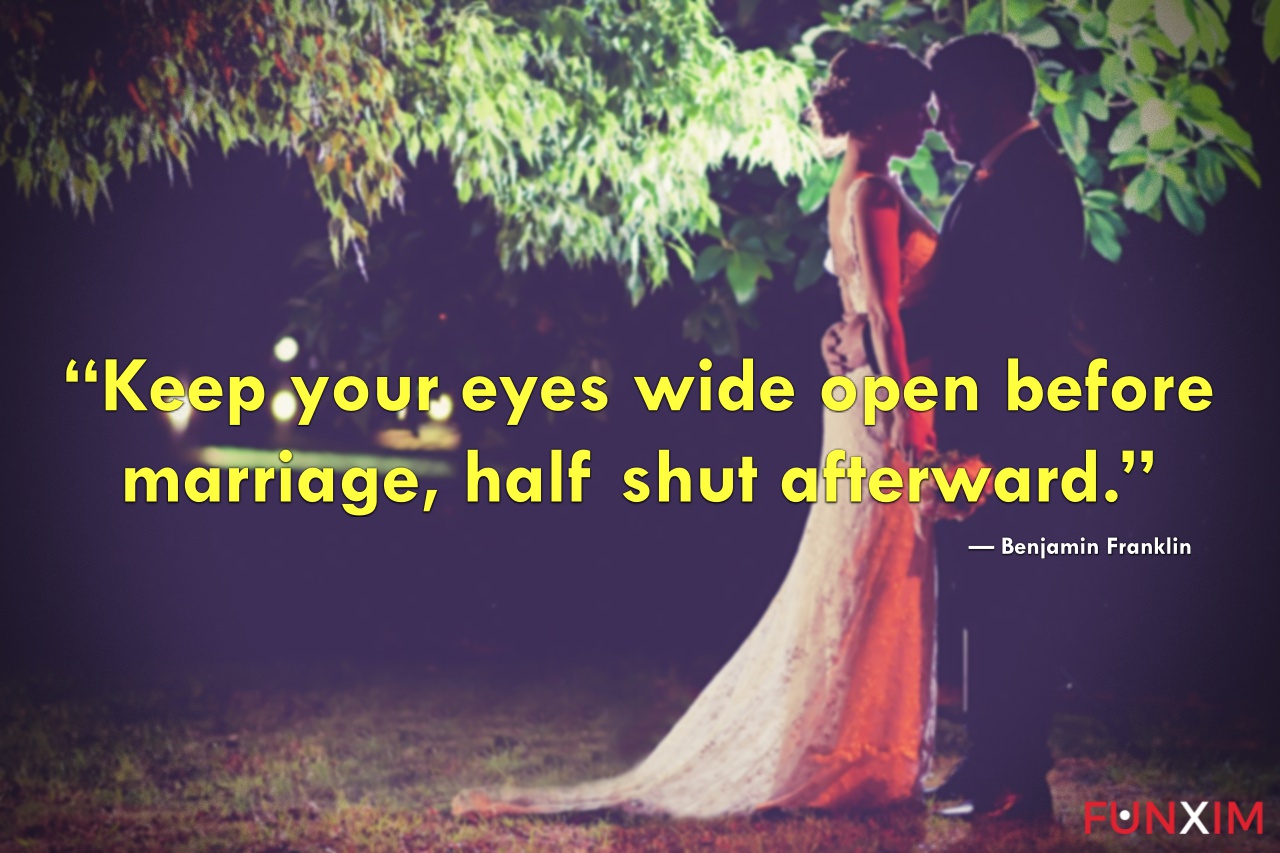 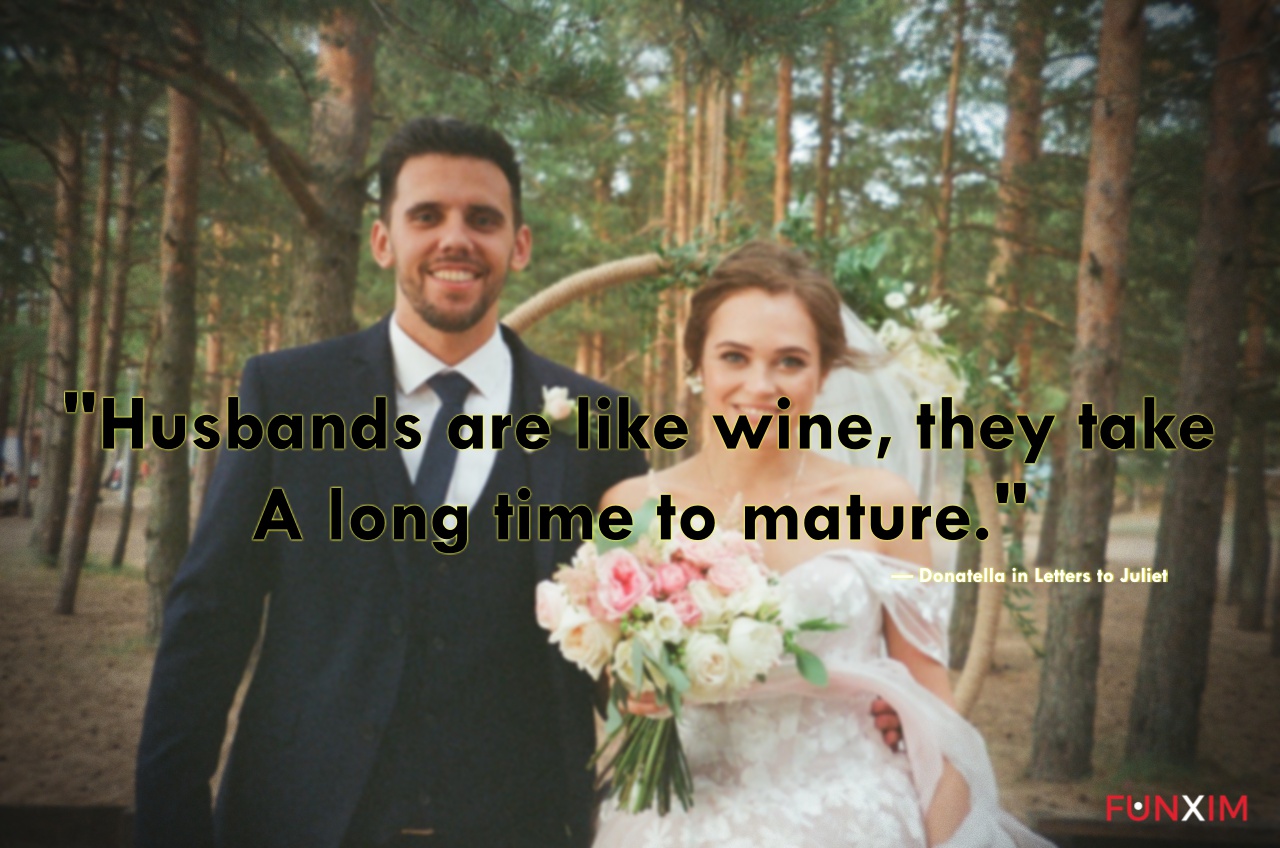 “Husbands are like wine, they take a long time to mature.” — Donatella in Letters to Juliet 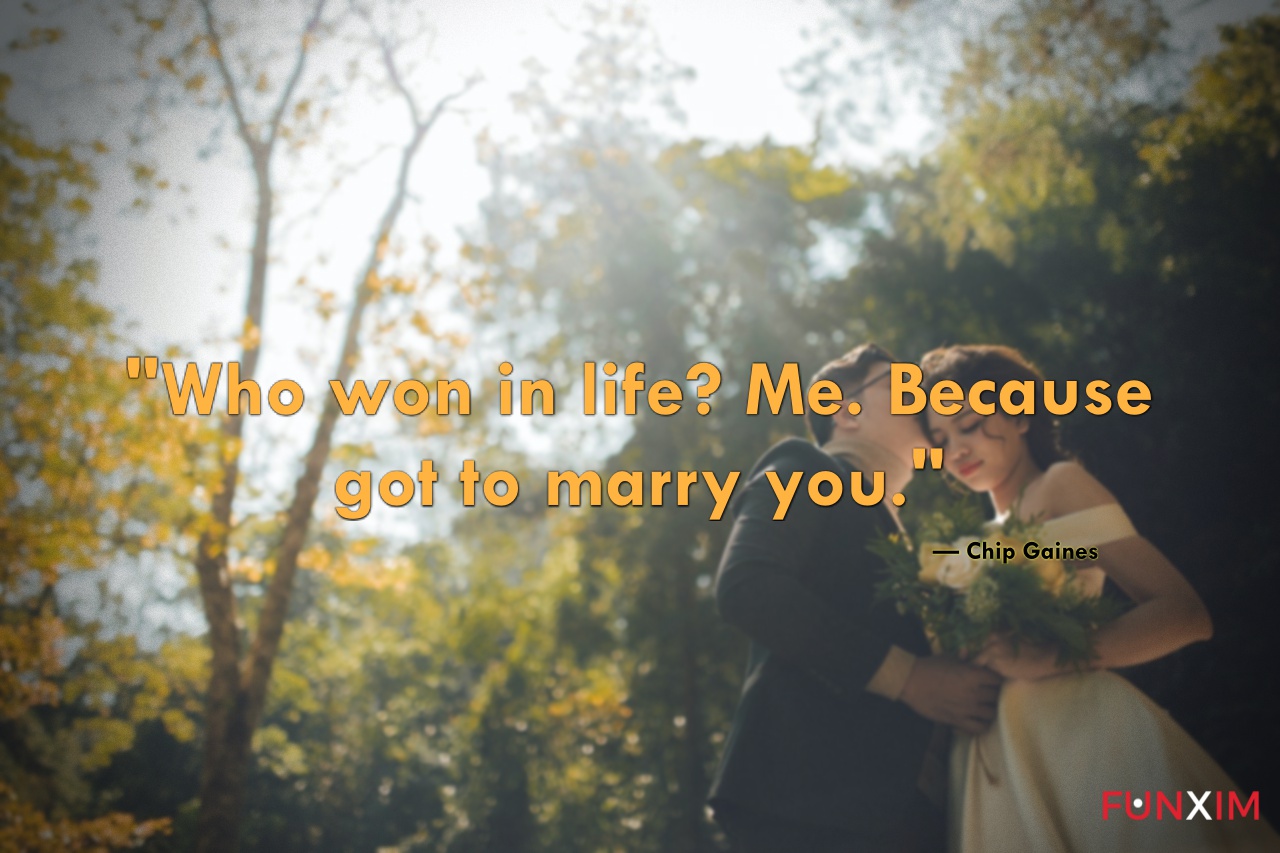 “Who won in life? Me. Because I got to marry you.” — Chip Gaines Also, Read 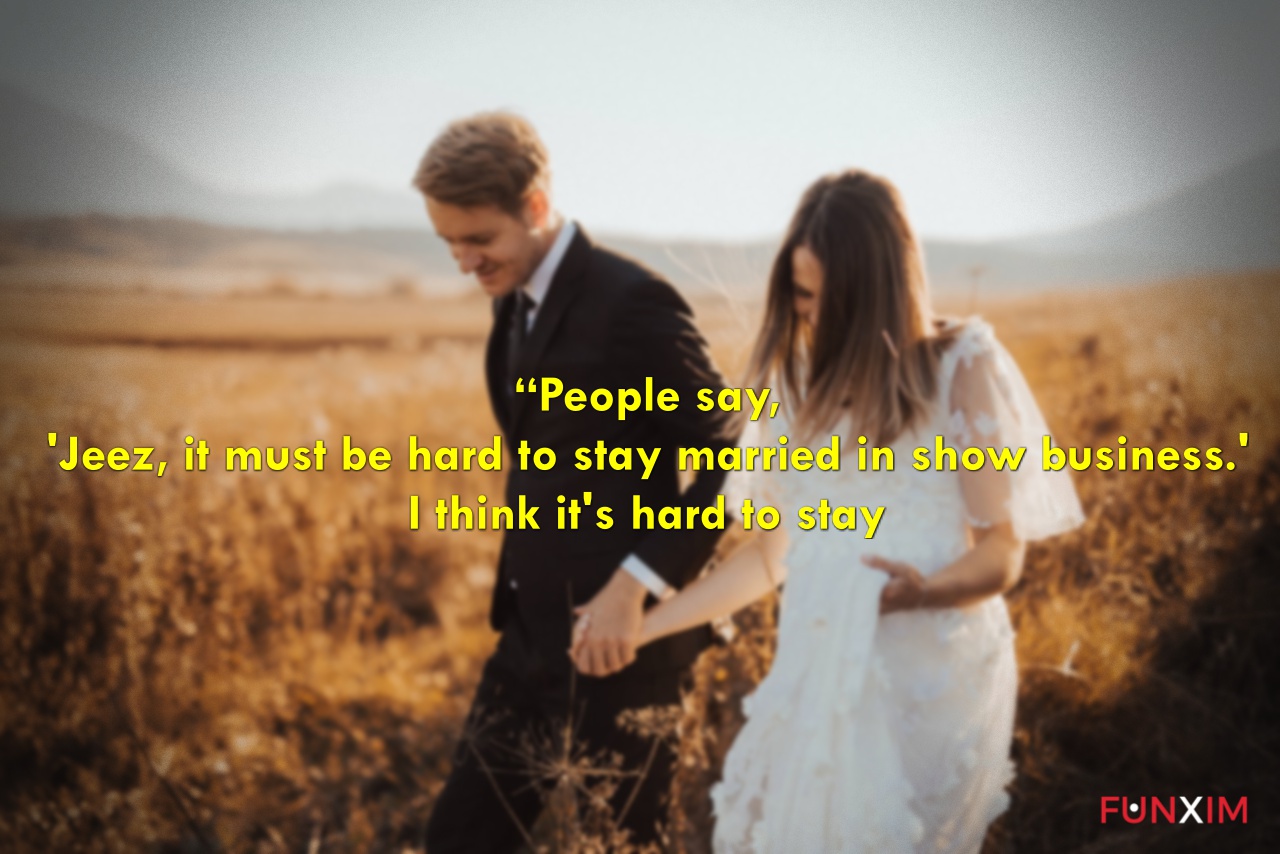 “People say, ‘Jeez, it must be hard to stay married in show business.’ I think it’s hard to stay 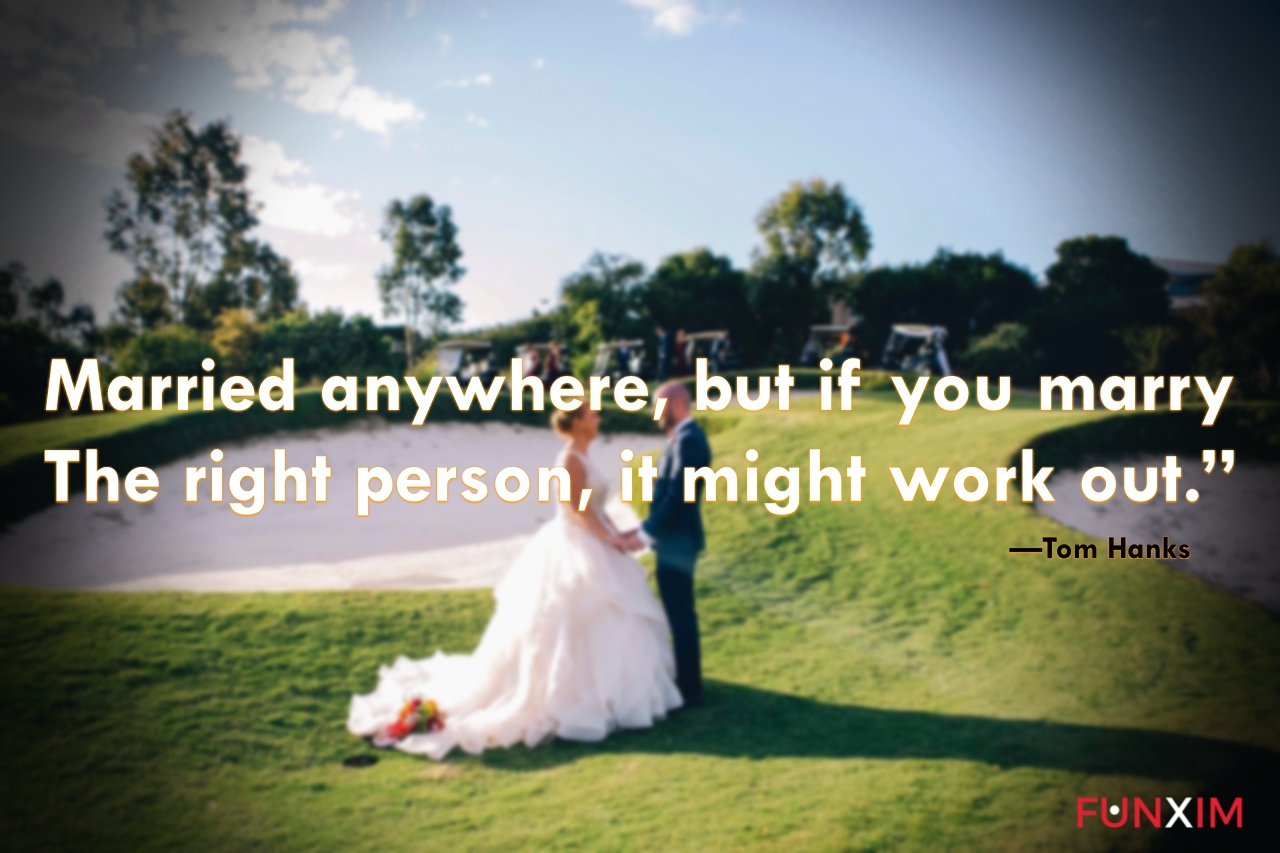 married anywhere, but if you marry the right person, it might work out.” —Tom Hanks 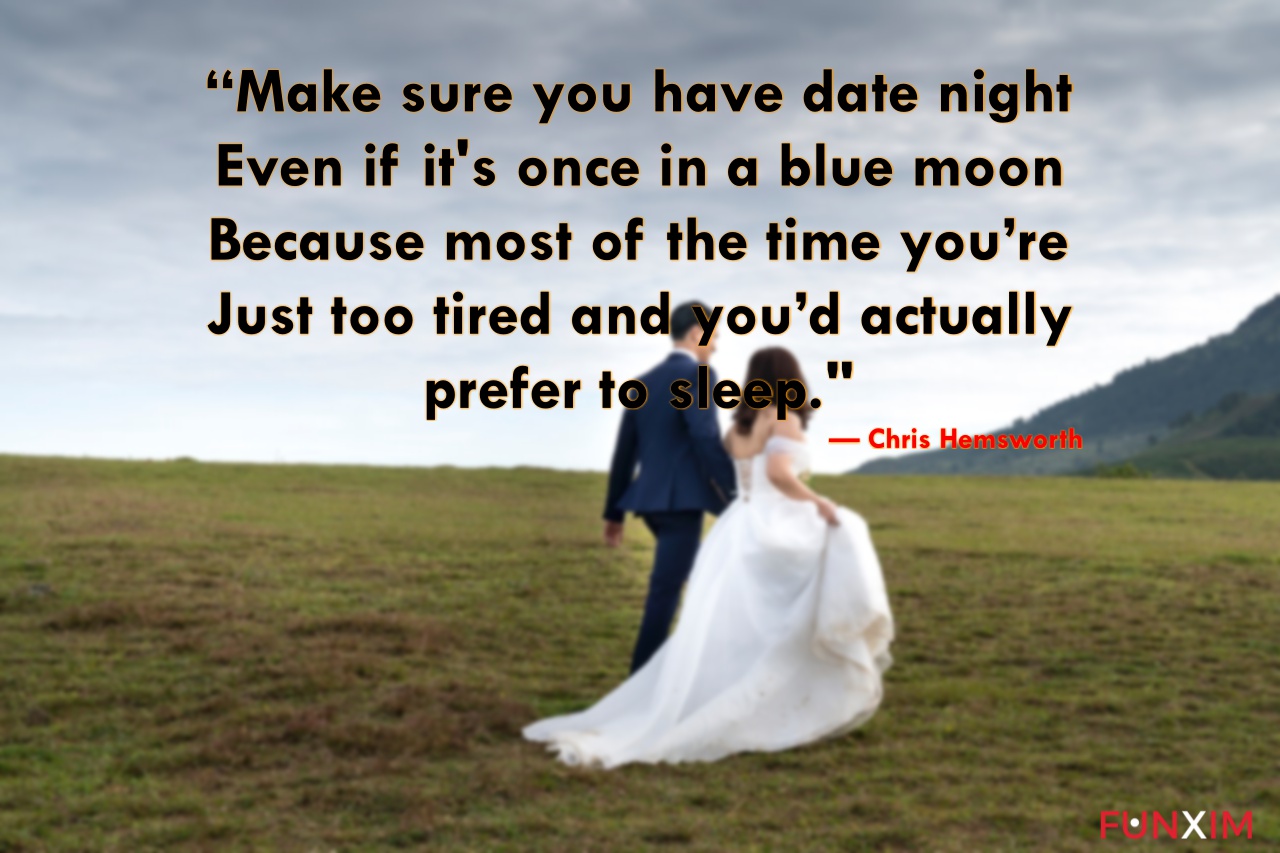 “Make sure you have date night even if it’s once in a blue moon because most of the time you’re just too tired and you’d actually prefer to sleep.” — Chris Hemsworth 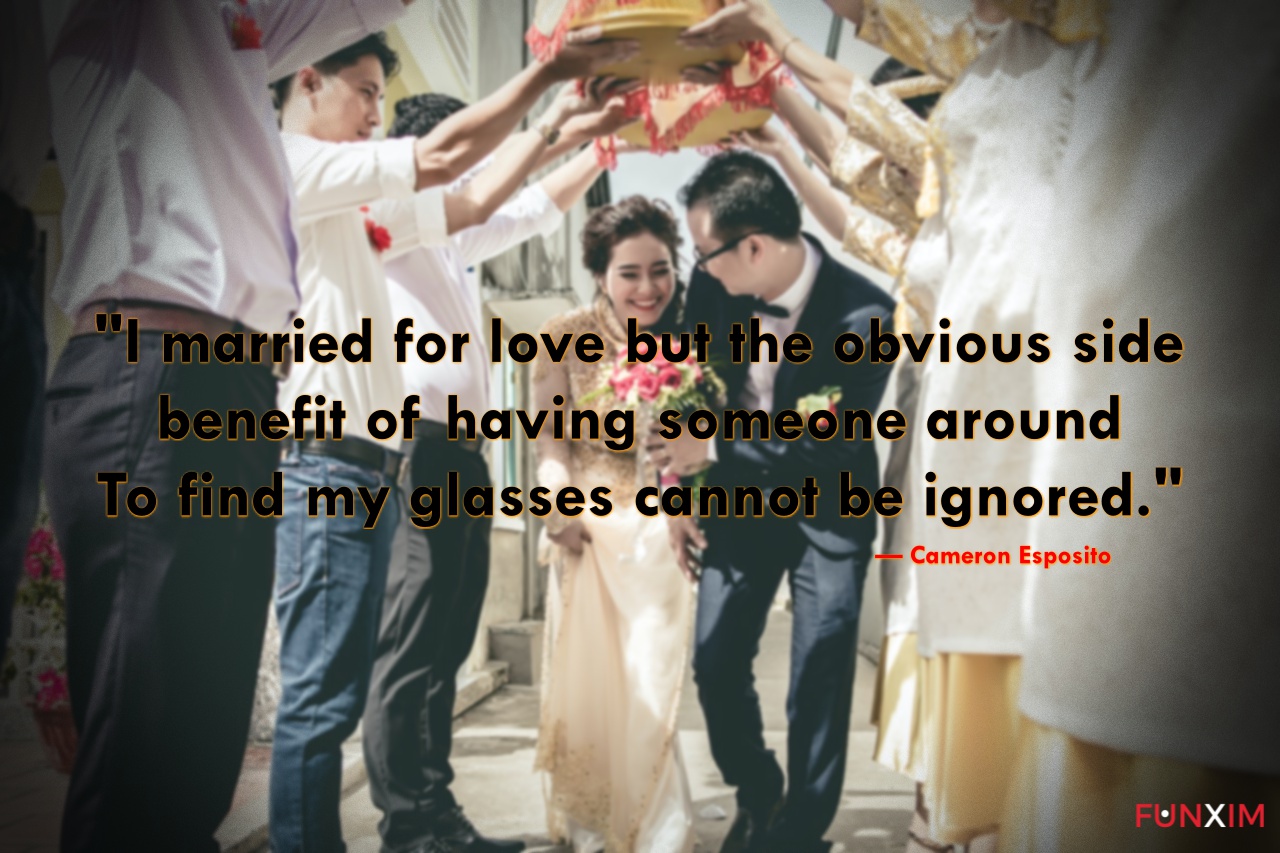 “I married for love but the obvious side benefit of having someone around to find my glasses cannot be ignored.” — Cameron Esposito 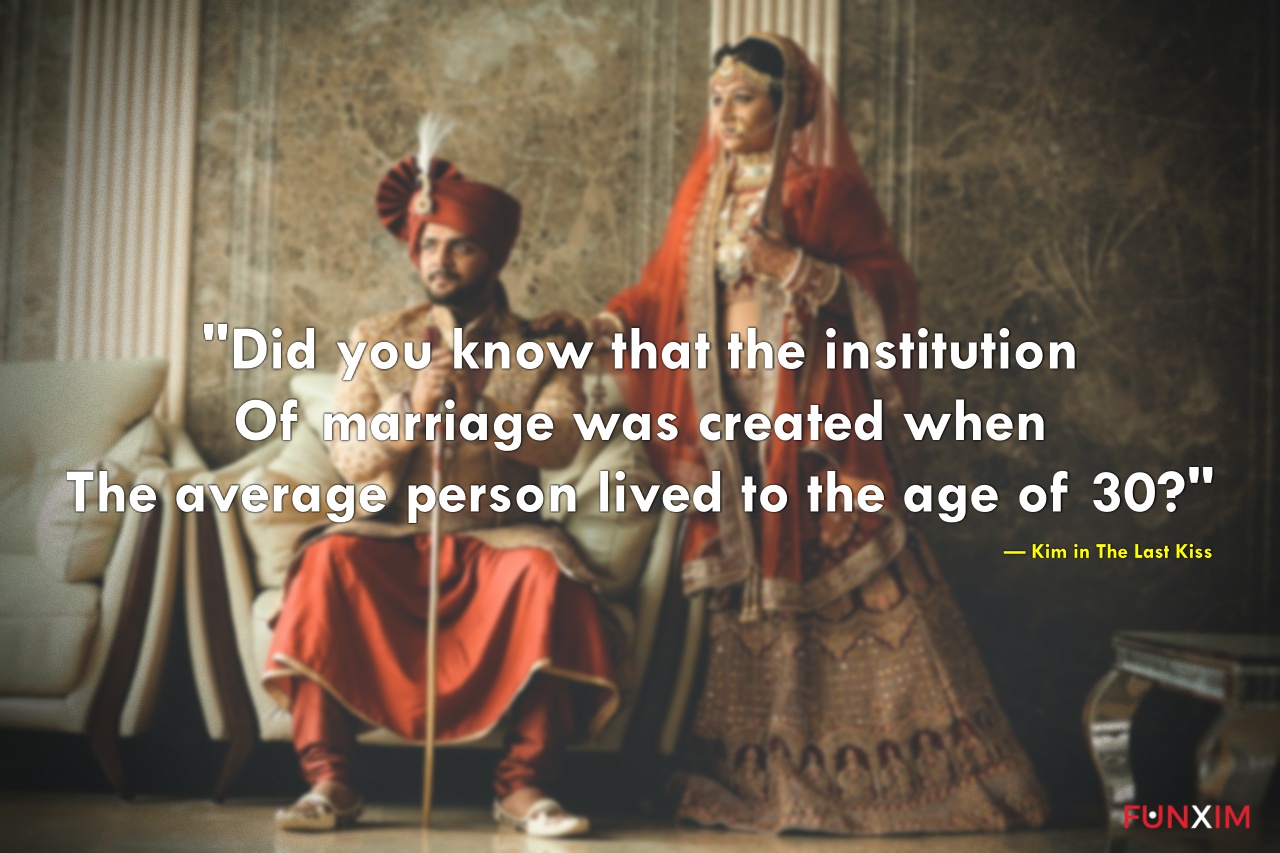 “Did you know that the institution of marriage was created when the average person lived to the age of 30?” — Kim in The Last Kiss 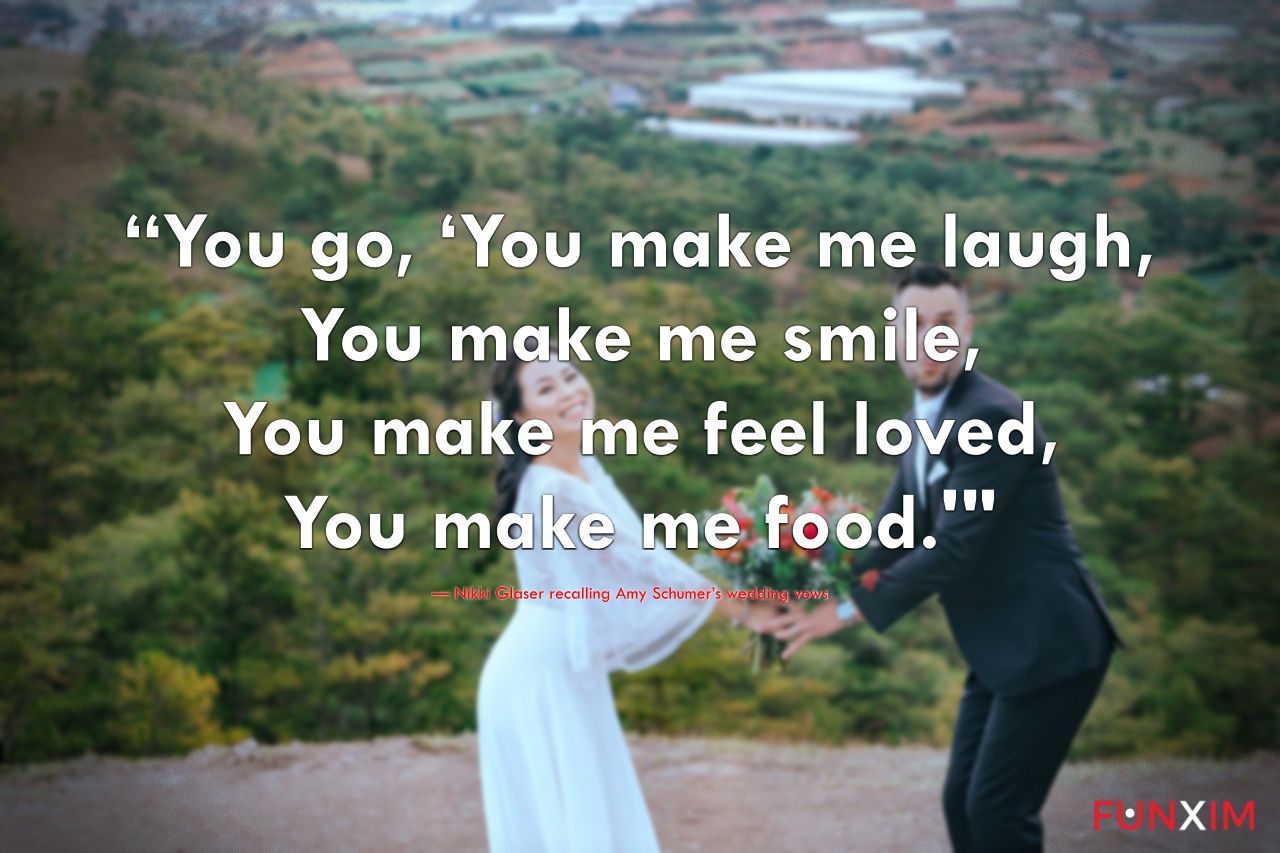 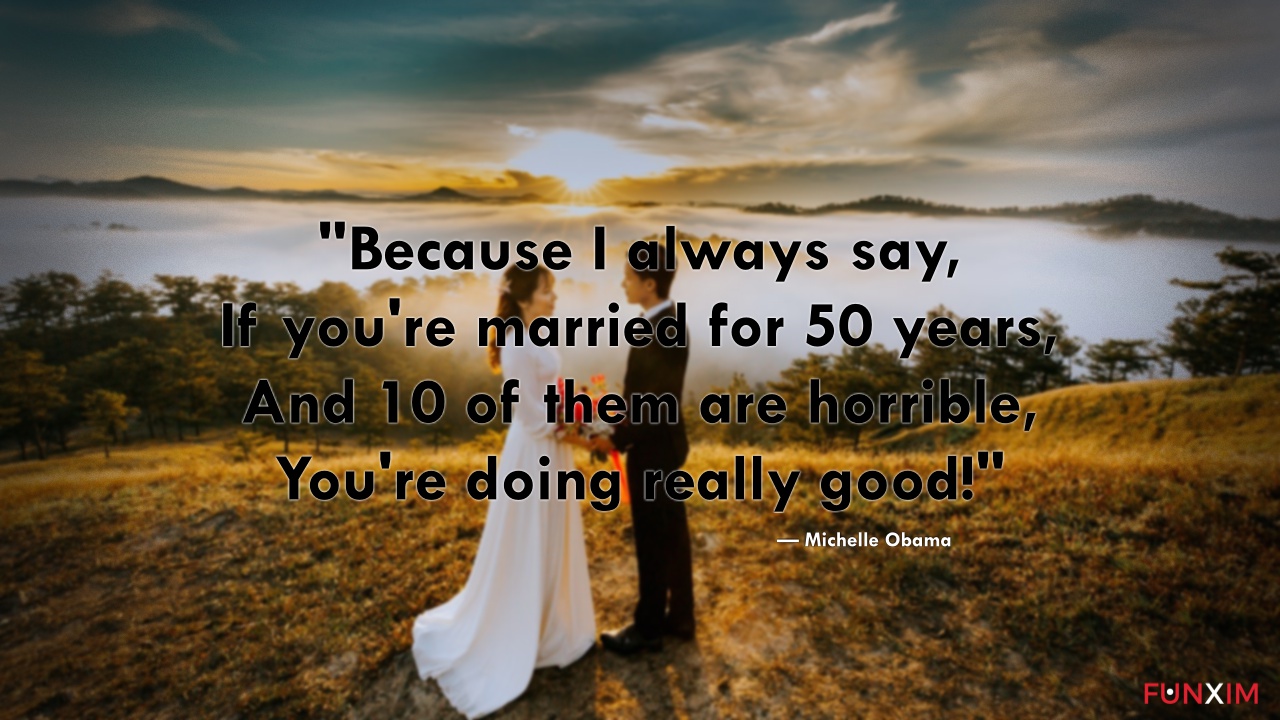 “Because I always say, if you’re married for 50 years, and 10 of them are horrible, you’re doing really good!” — Michelle Obama 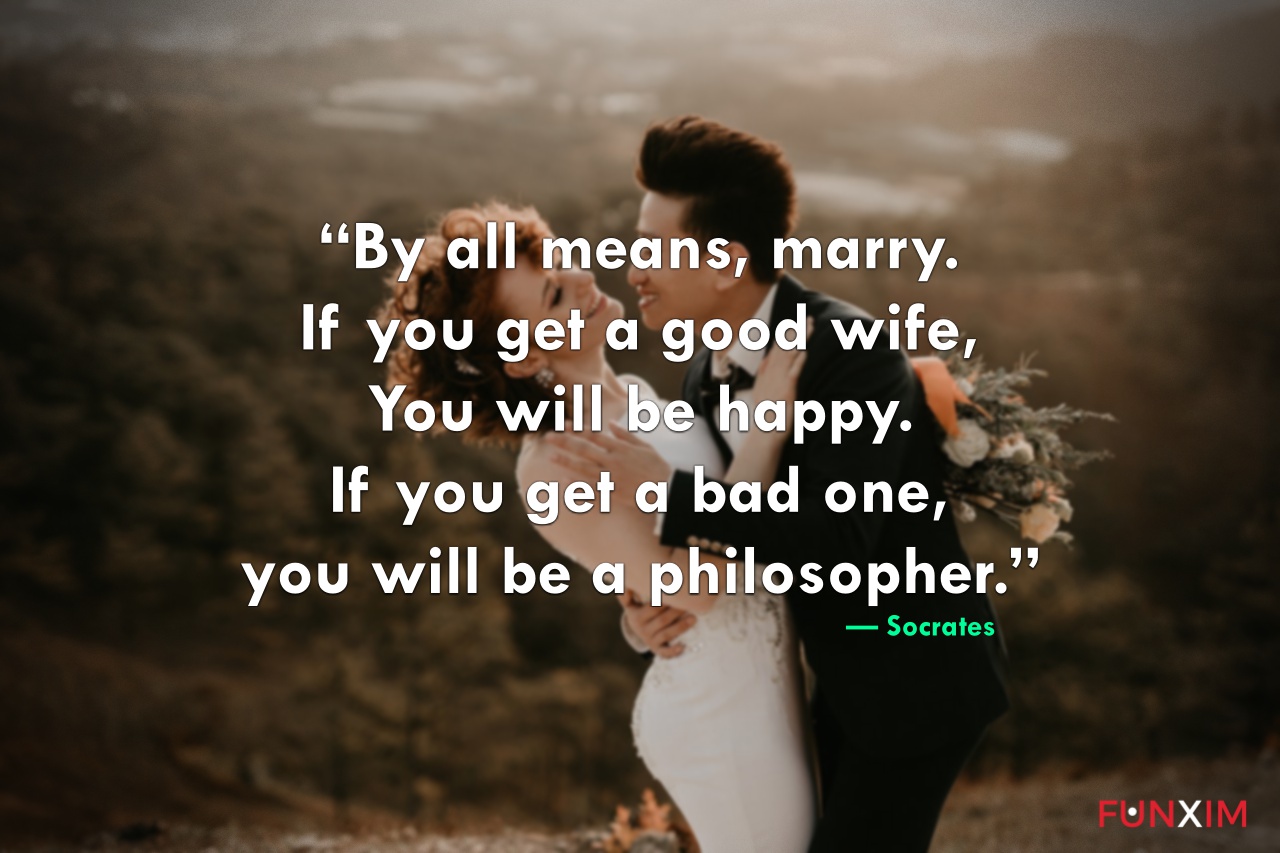 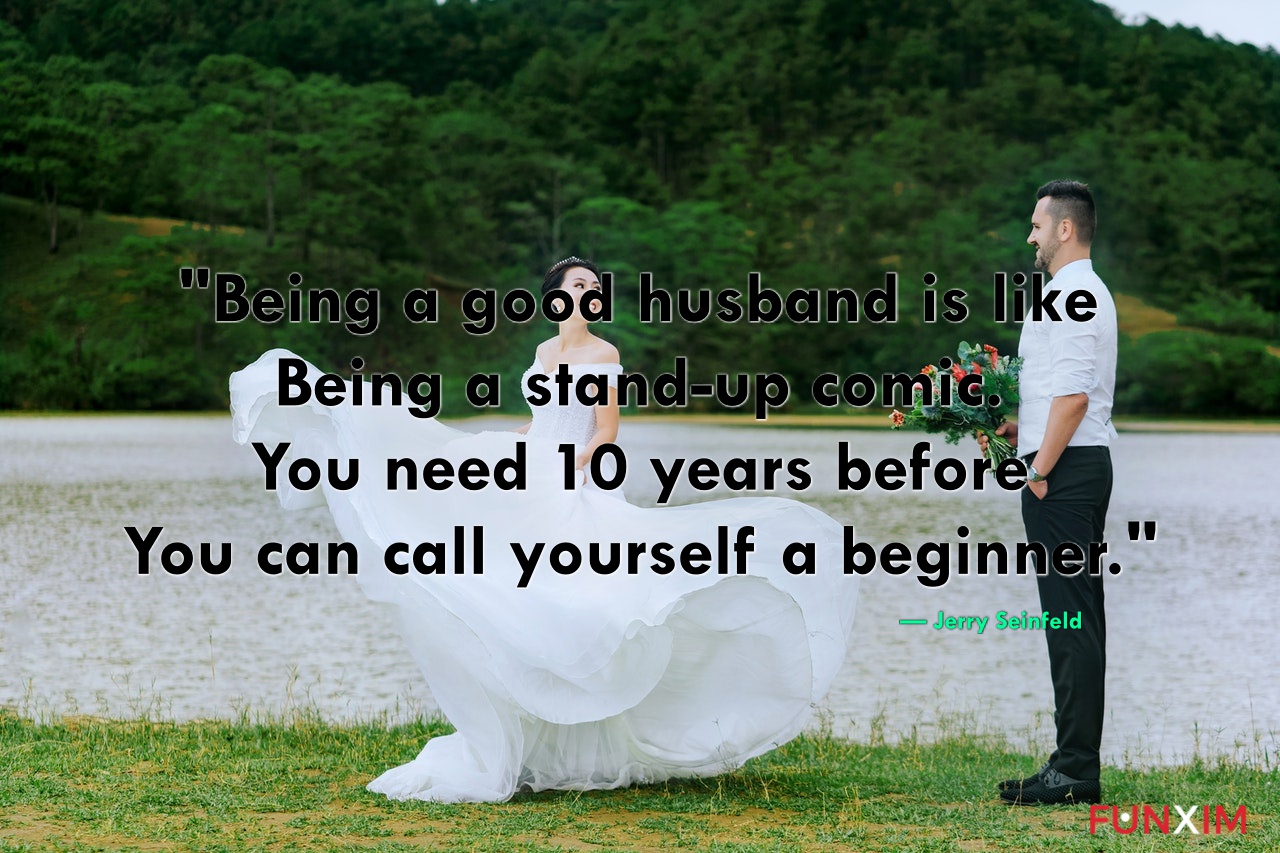 “Being a good husband is like being a stand-up comic. You need 10 years before you can call yourself a beginner.” — Jerry Seinfeld 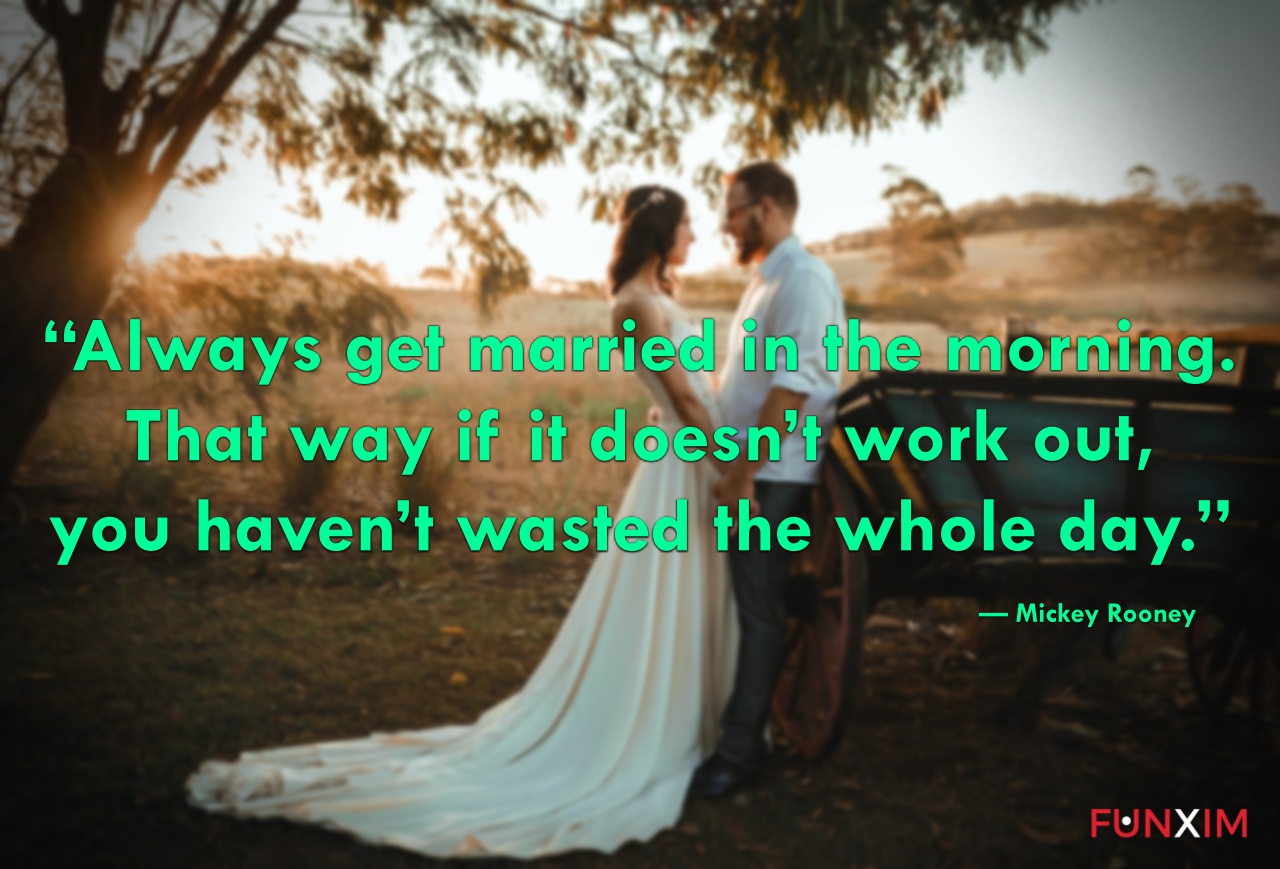 “Always get married in the morning. That way if it doesn’t work out, you haven’t wasted the whole day.” — Mickey Rooney 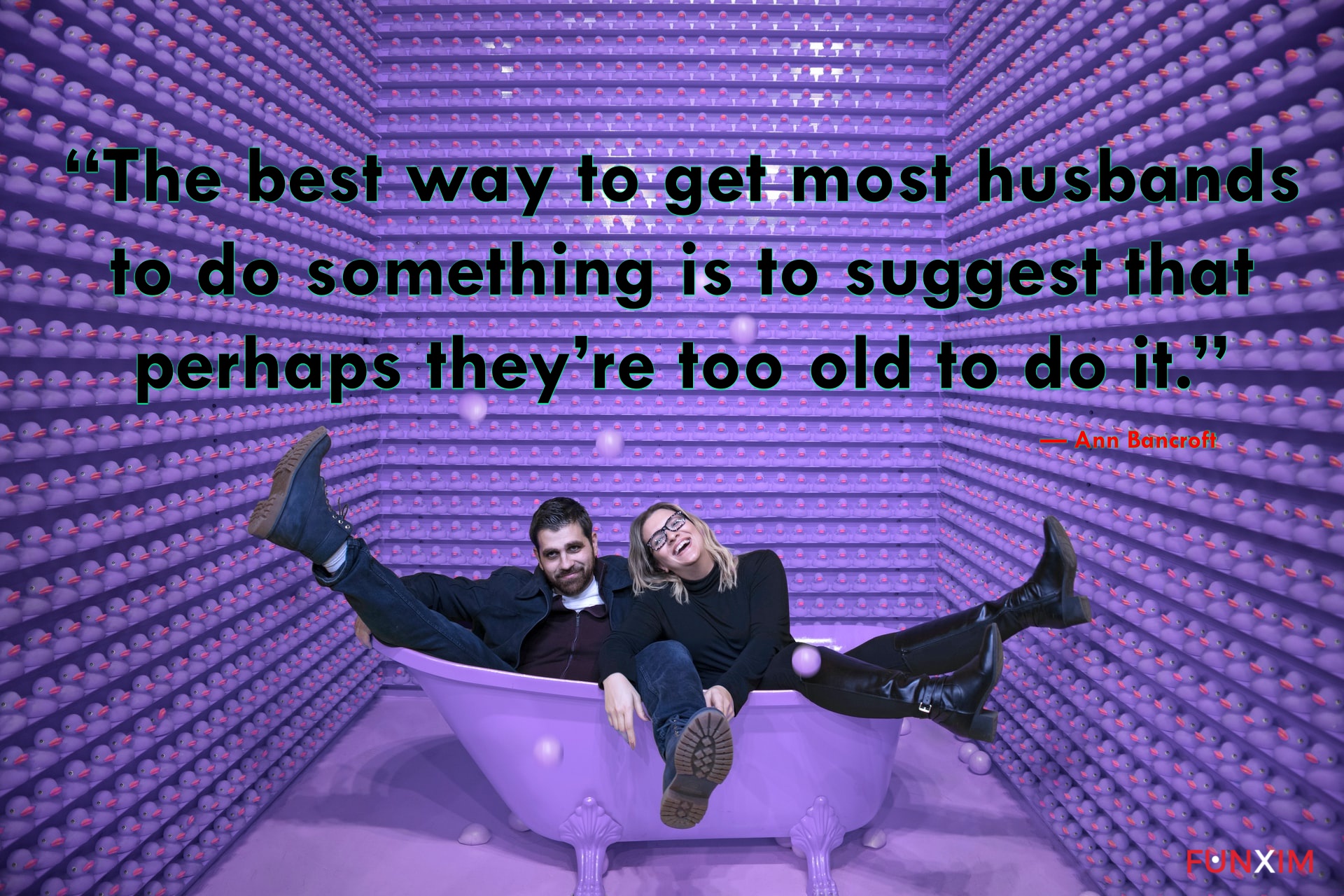 “The best way to get most husbands to do something is to suggest that perhaps they’re too old to do it.” — Ann Bancroft 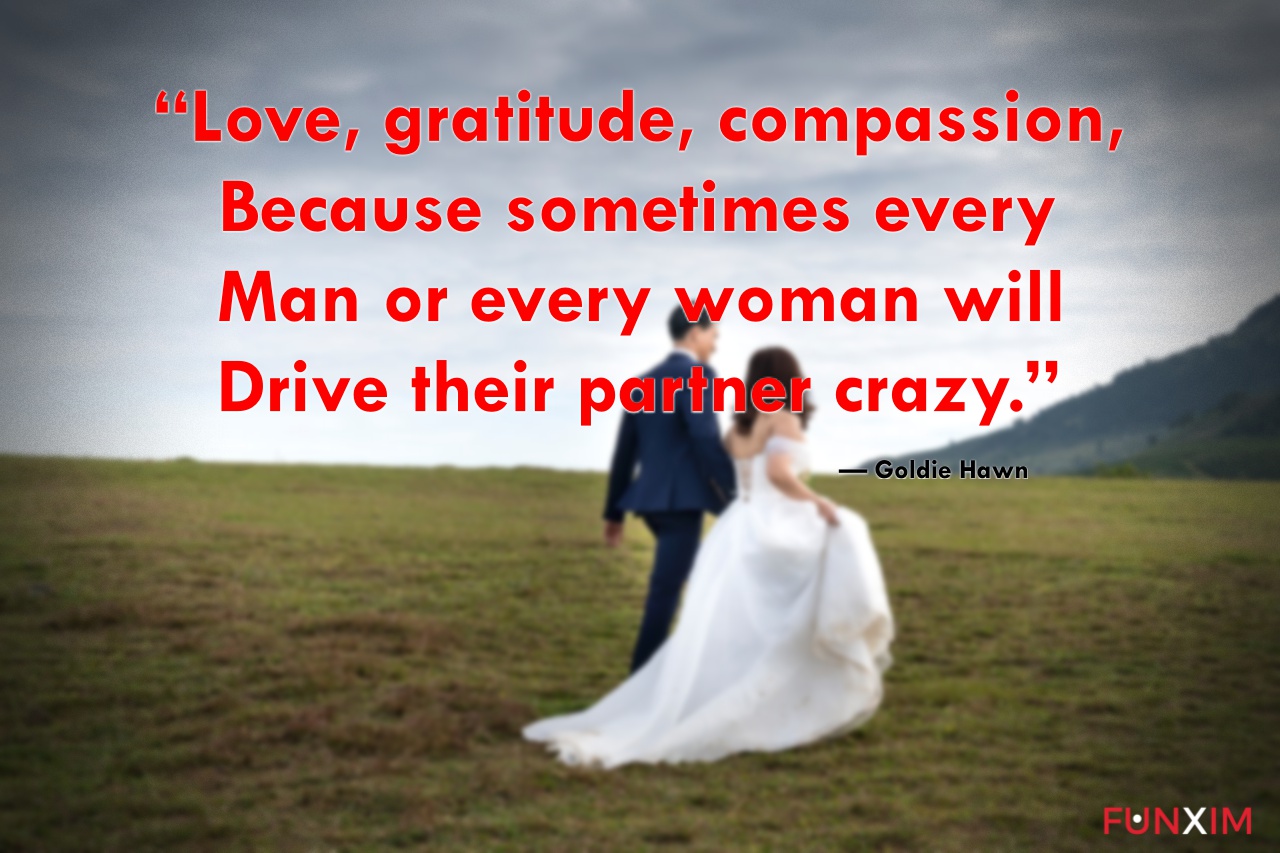 “Love, gratitude, compassion, because sometimes every man or every woman will drive their partner crazy.” — Goldie Hawn 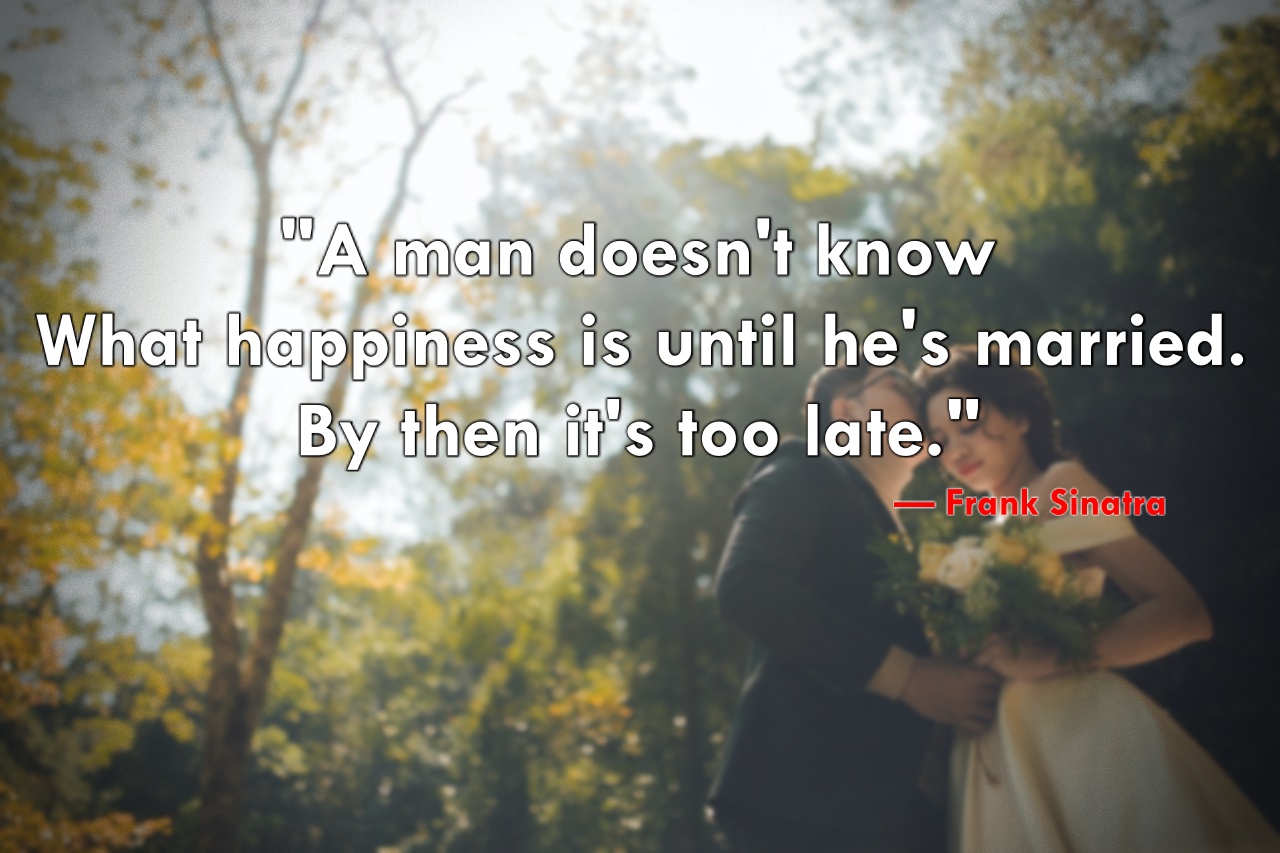 “A man doesn’t know what happiness is until he’s married. By then it’s too late.” — Frank Sinatra

“Our marriage was the most difficult, grueling, excruciating thing that we have ever taken on in our lives. And you know, we’re just not quitters.” — Will Smith

“There are only three things women need in life: food, water and compliments.” — Chris Rock

“When a man opens a car door for his wife, it’s either a new car or a new wife.”— Prince Phillip

“Before you marry a person you should first make them use a computer with slow Internet to see who they really are.” — Will Ferrell

“Marriage is like a tense, unfunny, version of ‘Everybody Loves Raymond.’ Only it doesn’t last twenty-two minutes. It lasts forever.” — Pete in Knocked Up

“A man’s main job is to protect his woman from her desire to ‘get bangs’ every other month.” — Dax Shepard

“Spend a few minutes a day really listening to your spouse. No matter how stupid his problems sound to you.” — Megan Mullally

“I don’t want to hear about the endless struggles to keep sex exciting, or the work it takes to plan a date night. I want to hear that you guys watch every episode of ‘The Bachelorette’ together in secret shame, or that one got the other hooked on ‘Breaking Bad’ and if either watches it without the other, they’re dead meat.” ― Mindy Kaling

“I’m just a diaper-changing facility hooked up to a life-support system, but my wife, she’s breakfast, lunch, and dinner. She’s a human Denny’s all day long … and it never ends for her. She’s the most beautiful Denny’s you’ve ever seen though, I guarantee it.” — Ryan Reynolds

“Look, in my opinion, the best thing you can do is find a person who loves you for exactly what you are. Good mood, bad mood, ugly, pretty, handsome, what have you. The right person is still going to think the sun shines out of your ass.” — Mac MacGuff in Juno

“Marriage is like a graph—it has its ups and downs and as long as things bounce back up again, you’ve got a good marriage. If it heads straight down, then you’ve got some problems!” — Dame Julie Andrews

“My most brilliant achievement was my ability to persuade my wife to marry me.” — Winston Churchill

“My wife and I have been married for 21 years, and without a doubt, the hardest times we’ve faced were those times when we hated each other.” — Andy Richter

“My wife didn’t take my name which isn’t weird but what’s weird is when people think it’s weird like we’re on a first-name basis anyway.” — Mark Agee

“The first draft of my vows, which I wrote the day after we got engaged, clocked in at around 70 pages.” – Leslie Knope in “Parks and Recreation”

“We just like each other. You start there…I still can’t believe my wife goes out with me. If we were in high school and I was just funny, I’d never have the courage to talk to her.”— Tom Hanks

“Michelle’s like Beyoncé in that song, ‘Let me upgrade ya!’ She upgraded me.” — Barack Obama

“After about 15 years I finally figured out that she’s always right. So surprisingly we just stopped fighting after that.” — Barack Obama

“Marriage is not just spiritual communion and passionate embraces; marriage is also three-meals-a-day and remembering to carry the trash out.” — Joyce Brothers

“Marriage has no guarantees. If that’s what you’re looking for, go live with a car battery.” — Erma Bombeck

“Only married people can understand how you can be miserable and happy at the same time.” — Chris Rock

“She’s your lobster. Come on, you guys. It’s a known fact that lobsters fall in love and mate for life. You can actually see old lobster couples, walking around their tank, you know, holding claws.” – Phoebe Buffay in “Friends”

“We have a couple of rules in our relationship. The first rule is that I make her feel like she’s getting everything. The second rule is that I actually do let her have her way in everything. And, so far, it’s working.” – Justin Timberlake

“I’d like to publicly thank my husband [Dax Shepard] for changing half the diapers in our house. I hope he changes all of mine one day…” — Kristen Bell

“Just found out the wife is writing a book about our honeymoon, called ’50 Shades of Just O.K.’” — Conan O’Brien